The world of Harry Potter holds that the Sorting Hat sorts a child based on what traits they possess. The brave go to Gryffindor, the intellectual to Ravenclaw, the cunning to Slytherin and the hardworking to Hufflepuff (or, if you believe the Sorting Hat in The Prisoner of Azkaban, Hufflepuff just gets the leftovers). However, as I was rereading the series, I came across a lot of holes in that line of thinking.

First of all, many of the kids sorted don’t actually have the traits espoused by their heads. 11-year-old Neville isn’t brave at all; he’s even scared of his own shadow. 11-year-old Draco isn’t anywhere near cunning (basically alienating Harry Potter, the wizarding world’s biggest celebrity). And don’t get me started on Crabbe and Goyle.

Now Neville definitely becomes brave, and you could argue that Draco develops cunning down the line. But the point is, they didn’t have those traits the moment they were sorted. So perhaps the Sorting Hat can somehow predict their future? Or read into their minds to see which traits they’ll develop if nurtured. That’s certainly possible, but how can you possibly tell which traits an 11-year-old will have? They’re basically the age of a 5th grader. And let’s assume, for the sake of argument, that in the wizarding world personalities are somehow fixed at the age of 11 (unlike in the real world). Then shouldn’t the data the Sorting Hat collects be extraordinarily valuable to help ensure your students grow up to be healthy individuals? You wouldn’t use it to assign a student their dormitory and then never touch that info again.

And that’s clearly also not true. Peter Pettigrew was sorted into Gryffindor and he never became brave. In fact his character is literately defined by its cowardice. Similarly, Marcus Flint gets held back a year. What’s cunning about that?

And that’s not even addressing the biggest issue with the above theory (and the biggest thing in favor of my alternate explanation): students’ choice matters. Probably the biggest insight into how the Sorting Hat works is what Harry tells his son Albus – “The Sorting Hat takes your choice into account.”

So clearly there’s an issue with the standard idea of how the Sorting Hat sorts. But then, if it doesn’t sort based on inner traits, how does it decide who goes where? I’d argue is sorts a child based on their values. Specifically, a child who believes Bravery and Courage are the most important traits would go to Gryffindor, where as a child who values Intellectualism and Love of Learning above all else would go to Ravenclaw. The key difference is that a child need not possess that trait, but mere value it.

This explains how Draco, completely inept at becoming cunning (but growing up in a family where it is prized), can be sorted into Slytherin while Hermione (who is an intellectual, but wishes to become like her heroes in Gryffindor) can choose to become a Gryffindor. Additionally, this neatly explains how polarized the houses are towards one another. If you take all the kids that value bravery and stick them into one house (an environment where everyone else also values bravery above all else), you’ll start to see them all become brave (and, in some cases, to the exclusion of the other traits).

If this theory is true, it also shows how badly the house system needs to be revamped (to stress inter-house friendships and development of all 4 major traits). But that’s a whole ‘nother discussion.

I originally posted this on the SSBM subreddit, where it was received pretty favorably. You can view my original post by clicking here.

Besides Smash, I also play a lot of Ultimate Frisbee (if you’re not familiar with the rules, just substitute the word basketball in for this post; the metaphor should still hold). Most of the time, especially at the beginner level, you can play defense simply by standing or running near “your man” (the person you’re guarding). As long as your body is there, you put on enough pressure that eventually your player will drop the disc or make an error. You don’t really need to do anything besides just being there and punishing their errors.

Eventually, however, I ended up playing an Ultimate team that, for some reason, I couldn’t actually play defense on. At first it seemed like their offense was a tier above and impossible to stop. After a while, one of my team mates pointed out that they weren’t making any unforced errors. It wasn’t that they were somehow making legendary plays, just that they weren’t messing up. And this made my team so much worse. Because, up until that point, we had never really been playing defense.

For the first time (at least the first time I realized), we had come across a team that would never mess up of their own accord. Instead, we’d have to actually make plays that caused them to mess up.

There’s a similar analogue in how beginners learn Smash (and most other games I feel), in that when you start out it’s possible to win, not by making any plays of your own, but by just being there. Eventually, your opponent will mess up on their own and as long as you can punish them, you’ll win. This great post goes a bit into how exactly players handicap themselves.

But eventually a player hit some point where they stop giving their opponent free openings and instead make their opponent actually play defense (i.e. force them to make mistakes).

This also, imo, explains a lot of how Wobbling can catapult a player far above their current skill level, until they hit a hard ceiling. As long as their opponents give them easy punishes, a wobbler can turn it into a stock. But once a wobbler faces an opponent who won’t make any unforced errors, the wobbler hasn’t learned the fundamentals required to play defense, and essentially stagnates. This applies to a lot of things often labeled as “cheese” (Peach’s D-smash, Chain Grabs, etc.)

I think this is a realization most players make eventually, either before of after they cross this turning point, but it’s something that’s only recently occurred to me and I wanted to put into writing.

Below is a chart of English pronouns. Skim it quickly and see if anything stands out to you:

For the most part, the chart seems fine. All the words (“I”, “You”, etc.) check out, and we say them regularly. But what’s interesting isn’t what’s on the chart; it’s what the chart has left out.

The chart notes that the 2nd person plural pronoun (basically the plural of “you”) is “you”. And while this is true in formal literature, if you’re like me and most Americans (or most English speakers in general), this isn’t the case in informal speech.

Years ago, back when Shakespeare was still alive, English used completely different second person pronouns. If you were talking to one person, you’d use “thou” (which is where the quote “Wherefore art thou, Romeo?” comes from). But if you were addressing multiple people you’d use “ye”. So what happened?

The funny thing about “ye”, is that even though it was plural, people started using it when talking to just one person if they wanted to show respect. So you’d use “thou” with your friends, but you’d call your teacher “ye” (even though “ye” was a plural pronoun). While this “plural-respectful” idea might be strange to us, it’s very common in Indian languages like Hindi and Gujarati. In Hindi, “tu” is singular, but you only use it in very informal situations. If you want to be respectful, you have to use “tum” or “aap”, which are both plural.

Eventually, language changed (as it always does), and people stopped using “thou”. “Ye” became “you”, and that brings us to today. Case close, right?

Well, now that “you” is used for both singular and plural, lots of dialects of English have developed new plural pronouns to fill the gap left by “ye”. 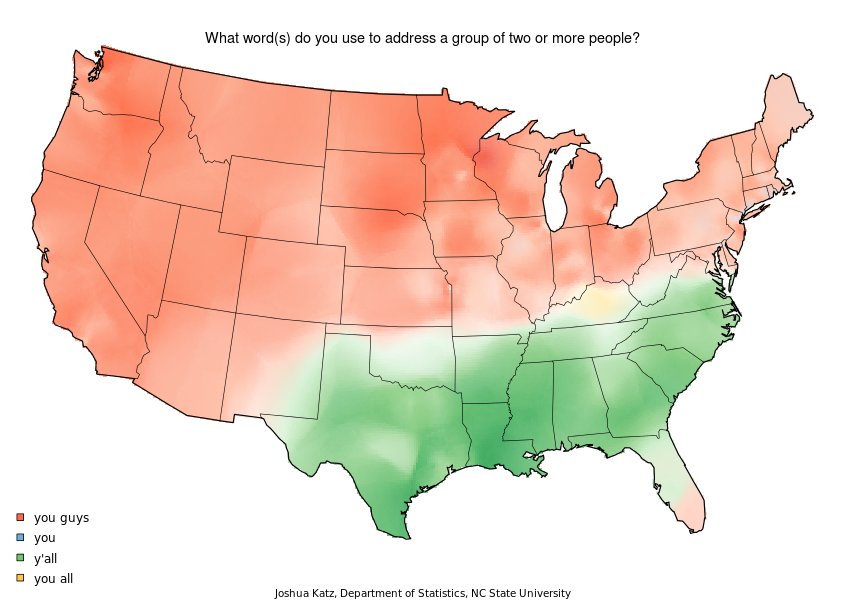 Perhaps the most (in)famous of these is “y’all”. “y’all” is a contraction of “you all” that, as the map shows, is used a lot in the Southern United States. “Y’all” is also used outside the US in India, and is also a feature of African American English (the dialect spoken by many black Americans).

Most of the rest of the US, however, uses “you guys” as the plural of “you”. Even though we think of “you guys” as two words (because we put a space between them), but, as this video shows, spaces don’t necessarily make words.

It’s worth noting that even though I said “ye became you”, that didn’t happen everywhere. Much of Ireland, and parts of the UK, still use “ye” as the plural  of “you”. This concept of one area retaining a feature that is lost everywhere else is pretty prevalent in linguistics. For example, Standard American English still retains the letter “r” in many places that British and Australian English have dropped it.

Beyond that there are many regional-specific oddities. In pockets of the American North-East, you’ll hear “youse”, “yinz”, “youse guys” and “you-uns”, while Jamaica is fond of “unu” (which actually comes from a West-African language). Parts of the UK say “you lot”, and certain parts of the deep south say “all y’all” (“y’all” being used in formal cases, similar to the Hindi example).